“Peak performance equals sustainably getting the most out of yourself and feeling good about it.“

Plenty has been written about achieving peak performance in sport, career and life. But there is a black hole in the literature when it comes to the tools and practices required to consistently perform at your absolute best over the course of an athletic season, a long professional career and ultimately an entire lifetime.

This week I convene with Brad Stulberg (@BStulberg) and Steve Magness (@stevemagness), two high performers who both quested for greatness but fell short, succumbing to the paralyzing burnout that all too often destroys the hopes and dreams of even the most talented, determined and capable.

Once a rising star at McKinsey & Co. with a stint consulting on health care at The White House, Brad was a golden boy determined to maximize his seemingly unlimited career potential. Instead, he worked himself right out the door of his chosen profession. Reinventing himself as a writer and author, today Brad specializes in the health and the science of human performance, known for his ability to merge the latest science with compelling personal stories to offer readers practical insights that they can apply in their own lives. Currently a columnist for Outside Magazine and New York Magazine, Brad has also written for Forbes, NPR, The Los Angeles Times, Runner’s World, and The Huffington Post. And because Brad’s insights are generally so awesome, they often find their way into my weekly Roll Call newsletter.

An elite track & field athlete with very realistic Olympic dreams, Steve clocked an extraordinary 4:01 mile in high school. As a collegiate, he would spend the next several years chasing the elusive sub-4 minute barrier, unable to best what he accomplished as a teen. Steve reinvented himself as one of the most accomplished, respected and in demand track & field and cross country coaches in the world. In addition to serving up duties at the University of Houston, he is the personal coach to some of the most accomplished professional and Olympic runners on the planet.

In the wake of their respective course corrections, both Brad and Steve wondered: what could we have done differently? And more importantly, what can be learned from the latest science, our experience and that of others to save people from suffering our fate? 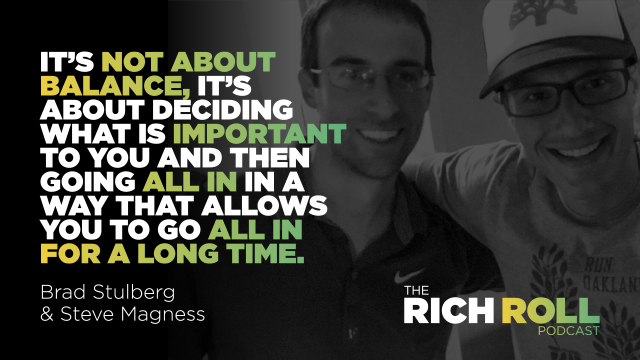 The product of that inquiry is Peak Performance: Elevate Your Game, Avoid Burnout and Thrive with the New Science of Success*. Based on science and insight derived from some of the world’s most accomplished athletes, artists, and intellectuals, it’s a must-read primer on the common principles that drive and ultimately sustain performance, regardless if you’re trying to qualify for the Olympics, break ground in mathematical theory, craft an artistic masterpiece or just become a better weekend warrior, parent or professional.

Today, I sit down with Brad and Steve to unpack the aforementioned common principles. Chockablock with life-enhancing treasures, this is a great conversation about:

My primary takeaway from this exchange? The path to sustained peak performance isn’t a to-do list. It’s a journey of self-becoming. It’s about discovering, uncovering and embracing who you truly are, and constructing a mindful, principled approach to actualizing that identity over the long haul.

I absolutely love both of these gentlemen and this takeaway-packed exchange lays bare that heart felt sentiment.

I sincerely hope you enjoy the conversation as much as I enjoyed having it.

P.S. – If you enjoyed Brad and Steve, sign up for their Peak Performance Newsletter. It’s great.

Please consider joining our  Thunderclap  — a totally free, simple to use crowdsourcing platform requiring only that you “pledge” a social media post in support of Julie’s new book  This Cheese is Nuts! that will automatically post to your timeline on June 13, the date the book is released. Our goal is to achieve a social reach of 2 million, so show your support for the movement and let all our voices be heard all at once! To join, just click on the “Join this Thunderclap” button below and follow the simple instructions. It only takes a minute tops (did I say it’s free?). Thanks so much for the support.

John Mackey On Conscious Capitalism, Building An Empire & The Power of Plants To Heal and Thrive

John Joseph Returns: The Evolution of a Cro-Magnon, Overcoming Insurmountable Obstacles & The Transformative Power of PMA