Dr. Michael Gervais On Elite Performance & The Psychology of Self-Mastery

“There’s no such thing as a big moment, there’s just another moment.”

At the highest echelon of elite performance, all the athletes possess otherworldly talent. Their thirst for glory is equally preternatural. All of them train to the outer limits of physical possibility. And they are all extraordinarily adroit at focusing on almost inhuman, impossible goals.

So what accounts for the distance between the Olympic gold medalist standing proudly atop the podium and the athlete watching the games on television at home?

Is it luck? Talent? Support? Resources? Of course every result is significantly influenced by some combination of these important variables. But all things being equal, the difference between the champion and the also ran boils down to one distinct variable:

Once the embarrassing last stop on a flailing athlete’s career, the world’s top sports psychologists now enjoys a highly influential and respected role proactively honing the mental and emotional edge of today’s most successful athletes, CEOs and creatives looking to elevate peak performance beyond the imaginable.

Enter Dr. Michael Gervais — the go to high performance psychologist everyone is talking about. 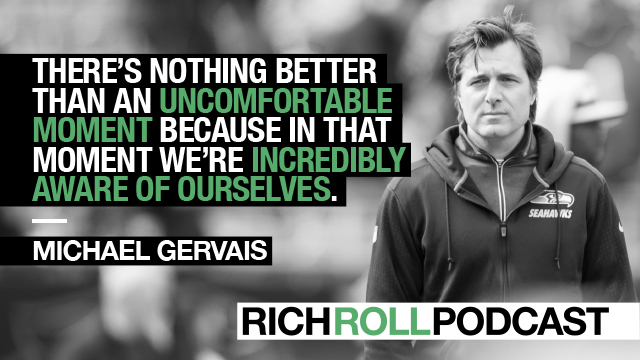 A key member of the Red Bull High Performance Program, Michael works in the trenches of high-stakes environments with some of the world’s most prolific Olympic and professional athletes — rare air where there is no luxury for mistakes, hesitation, or failure to respond.

Dr. Gervais’ results are beyond impressive. If you follow the NFL, then you might recall Michael as the guy Seattle Seahawks coach Pete Carroll credits as integral in their 2014 Super Bowl win for the meditation, mindfulness and other crucial team building techniques he helped foster and instill into the fabric of the Seahawks organization and team culture that paved the team’s path towards incredible success.

You might also remember that Felix Baumgartner’s now-infamous Red Bull Stratos jump from an altitude of 128,000 feet almost never was simply because Felix simply could not overcome the high level of anxiety and claustrophobia he experienced every time he donned the jump suit. It was none other than Gervais who helped Baumagartner resolve the issue and get Stratos back on track. No Gervais, no history making jump.

And more recently, Michael is the man behind Luke Aikins, who astonished the world this past July by becoming the first skydiver to jump from a plane at 25,000 feet without a parachute or wingsuit and live to tell the story.

Dr. Gervais has also worked intimately with US Olympic Team members like beach volleyball superstar Kerry Walsh Jennings, as well as swimmers, snowboarders, golfers, basketball players, track and field athletes, an impressive array of top collegiate programs, and professional sports organizations including the NBA, NFL, NHL, MLB and UFC. In addition, his work has played an integral role in the US Military, as well as several collegiate and high school programs.

While Dr. Gervais’ roster includes some of the sports world’s most elite, this isn’t just about high performance athletes.

Whether you are an athlete or a weekend warrior, an executive or a stay-at-home parent, it’s about transcending our self-imposed limitations to unlock dormant potential to unleash your unique, most authentic life.

Because everyday, every one of us — irrespective of circumstance — has the opportunity to create a living masterpiece.

Today marks my second conversation with Michael. Picking up where we left off in December 2014 (RRP 120), this conversation delves deeper into Michael’s life, experience and message, further canvassing the psychological topography of performance and even probing some surprisingly mystical terrain.

We cover a lot of ground in this conversation, including:

At it’s core, this is a conversation about self mastery. A state of being that isn’t about motivation. And has nothing to do with winning. It’s about courage. It’s about pursuing the razor’s edge of what’s possible. It’s about belief.

And it’s about love.

A very special human, Michael is truly one of my favorite people and this conversation reveals why. I hope you enjoy listening to it as much as I enjoyed having it. And while you’re at it, make a point of subscribing to his podcast. A unique mining of the mindsets behind high performers across a diversity of disciplines, Finding Mastery stands alone.

Spots are now available for our Australian retreat— for info visit plantpowerworld.com

Headspace.com: Train your mind for a healthier, less-stressed life. Download the FREE app and begin their Take10 program, for 10 days of guided meditation at headspace.com/ROLL

In addition to curating conversations with those who have dedicated their life toward Finding Mastery, Michael has vowed (with the help of co-founder Pete Carroll) to help 1.5 billion people be the best they can be. To learn more check out winforever.com.