John Joseph Returns: The Evolution of a Cro-Magnon, Overcoming Insurmountable Obstacles & The Transformative Power of PMA

“No matter what you can climb out of any hole. No matter how far in the depths of hell you are. I’ve been down there, but I was willing to climb out of that that and surround myself with positive people. That’s the thing — the association we keep.“

Back by popular demand, my good friend, podcast favorite and provacateur-at-large John Joseph returns for an unprecedented 5th appearance on the show to share more of his extraordinary story. A story that lays bare the indelible power of the human spirit to face and transcend unimaginable, seemingly insurmountable obstacles and ultimately transform one’s life wholesale.

If you’re a longtime listener, Johnny Bloodclot needs no introduction. For the uninitiated, John is a sui generis American original. The very definition of hardcore. A survivor. A spiritual warrior spouting straight talk directly from the streets of the Lower East Side with one singular, driving purpose:

getting people to wake the f&*k up. 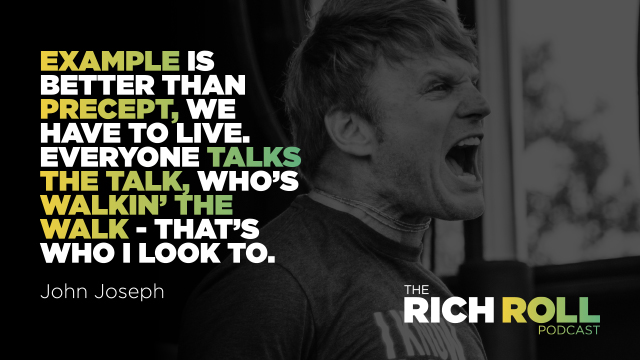 Conceived and raised in abuse, deprived of opportunity and left to his own devices, John turned to violence and drugs on the rough and tumble streets of New York’s Lower East Side in the 1970’s. It’s a path that predictably led to violence, crime, addiction and incarceration. Spending his teens as a drug mule led to a series of unsavory foster care homes, culminating in unimaginably horrific stints in juvenile detention.

To avoid long-term incarceration, he enlisted in the Navy, only to go AWOL after a fight. Fleeing the law and rudderless, John found redemption in the hardcore punk rock scene flourishing on Manhattan’s Lower East Side in the early 1980’s. Taken in by the Bad Brains’ frontman H.R., John began to explore not just his musicianship, but his spirituality.  It’s a journey that birthed the Cro-Mags — one of the era’s most iconic and influential hardcore punk bands. Later, he found his spiritual salvation living in a Hare Krishna monastery, birthing a life-long love of meditation, yoga, the vegan lifestyle, racing Ironman triathlons, and most importantly, his profound devotion to service.

Renown for his straight talk, no BS approach to living and the power of PMA — positive mental attitude — John continues to tour as frontman for both Cro-Mags and his new band Bloodclot. He also just released a 2nd edition of his memoir Evolution of a Cro-Magnon* and is the author of nutrition primer Meat Is For Pussies*, with a foreword by yours truly.

A man who truly walks his talk, every conversation with John leaves me better than before. Today’s conversation proves that just when I think we’ve covered it all, new layers emerge. So even if you’ve enjoyed all of John’s previous appearances on the podcast, this episode will find you riveted by a stream of mind-blowing, never previously told stories that are certain to incite, provoke, educate and inspire.

LANGUAGE ADVISORY: John drops more f-bombs in this conversation than I could count. John is John, and editing was out of the question. So if you’re queasy about foul language, consider yourself warned and make sure the kiddos are out of earshot.

I love this conversation. But I love John even more. Here’s to my brother from another mother.

P.S. – If you are new to the show and intrigued by John, do yourself a favor and check out his previous appearances on the show, starting with RRP 41. One of the most powerful podcasts I have ever published, it’s a beautiful documentation of an incredible life. When you’re done with that, dial up RRP 66, RRP 95 and RRP 223. Thank me later.

Get the second edition printing of The Evolution of a Cro-Magnon* updated with new chapters!

PRE-ORDER John’s latest release from Bloodclot – (“Up In Arms”), out July 14th on Metal Blade Records.  Featuring Joseph on vocals, Todd Youth on guitar, Joey Castillo on drums and Nick Oliveri on bass.

Also check out: Meat Is for Pussies: A How-To Guide for Dudes Who Want to Get Fit, Kick Ass, and Take Names*

Please consider joining our  Thunderclap  — a totally free, simple to use crowdsourcing platform requiring only that you “pledge” a social media post in support of Julie’s new book  This Cheese is Nuts!* that will automatically post to your timeline on June 13, the date the book is released. Our goal is to achieve a social reach of 2 million, so show your support for the movement and let all our voices be heard all at once! To join, just click on the “Join this Thunderclap” button below and follow the simple instructions. It only takes a minute tops (did I say it’s free?). Thanks so much for the support.