“Human existence is but the blink of an eye. It doesn’t take much research to think about how we evolved and why we evolve the way that we do.”

Western medicine is extraordinary. Over the last several decades, scientific advances in the diagnosis and treatment of previously thought incurable diseases has utterly transformed how we live.

But with these breakthroughs comes an arrogance — a hubris that modalities outside the very narrow rubric of our dominant paradigm are without value — archaic, outdated legacies of less developed cultures.

But is this always the case? Or do lessons remain to be learned by taking a critical but objective look at how other societies approach health and well-being?

This question nagged at Sanjay Gupta, MD. So he decided to find answers for himself.

For those unfamiliar, Sanjay is the associate chief of neurosurgery at Atlanta’s Grady Memorial Hospital and assistant professor of neurosurgery at the Emory University School of Medicine. But most people know him as the multiple Emmy-award winning chief medical correspondent for CNN. In his tenure as a journalist he has spent decades covering everything from the 2003 invasion of Iraq to the Haiti earthquake in 2010, where he performed surgery on a 12-year-old girl earthquake victim along with Henri Ford and two U.S. Navy doctors.

If that’s not enough, this dad, husband, and novelist was named among “The Sexiest Man Alive” by People magazine and in 2009 was selected for the position of Surgeon General by President Barack Obama — a job he declined.

To answer the aforementioned question, Sanjay spent the last year traveling the world, finding where people live longer, happier and more functional lives than anywhere else on the planet. The result of his quest is the recently-aired CNN Original Series Chasing Life — must-see TV if you haven’t caught it already. 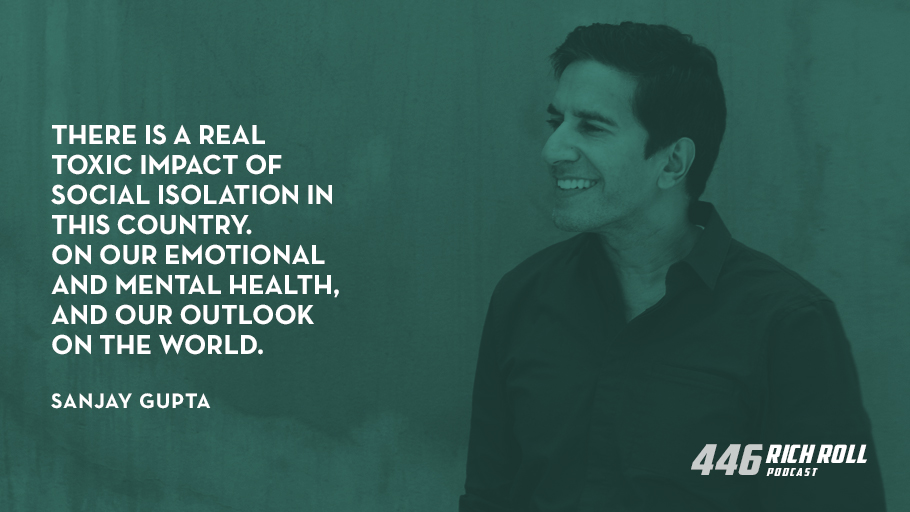 Today we cover his origin story and incredible career. We discuss the responsibility of journalism in the era of alternative facts — and the role storytelling has played in his personal brand of reporting.

We talk about his time in the White House, what it’s like covering overseas conflict zones overseas, and how he manages his work- life balance.

In addition, we canvass the current state of health care in America, what he learned about health, happiness and longevity in the course of producing Chasing Life, and the not to be overstated incredible impact Sanjay has had on my own life.

Over the years Sanjay has become a good friend, as well as a mentor to me. He is someone I have wanted to get on the show from day one. I love this guy, and I’m delighted to help share his story with you today.

The visually inclined can watch our entire conversation on YouTube here: bit.ly/sanjaygupta446 (please subscribe!) and the podcast is of course available on Apple Podcasts and Spotify.

Photos of Sanjay with Rich courtesy of Ali Rogers

Jaybird: Premium sound Bluetooth headphones, perfect for athletes, runners, & fitness fanatics! Go to jaybirdSPORT.com and use the promo code RICHROLL to receive 20% off of a pair of the just released RUN XT true wireless headphones (limit one pair per customer) and free shipping through the end of June.

Harrys.com: A superior shave at an affordable price. Visit harrys.com/ROLL to redeem your Free Trial Set, which comes with a razor, five-blade cartridge, shaving gel, and post shave gel. All you pay is shipping.