“There was a time when you believed anything was possible and I want to bring people back to that. And I think the mountains do that.”

Imagine being the very best in your sport. Undefeated, the future is bright indeed. But deep down the zero sum game of competition just doesn’t sit right. Because for you, sport isn’t about winners and losers. It’s about play. It’s about freedom. It’s about love.

But mostly it’s about artistic self-expression.

This is the story of Lynsey Dyer.

One of the best big mountain skiers on the planet, Lynsey is an extraordinary and most unexpected athletic talent who walked away from competition at the peak of her potential to courageously blaze her own path. A unique path that has helped refine what it means to pursue sport professionally. A path based not on podiums but on adventure. Seeking joy. Empowering others. And expressing one’s unique voice.

Over the course of a decade long career, Lynsey has won every big mountain competition that she entered. She has also won several freesking competitions and awards including the 2004 International Free Skiers Association North American tour champion. In 2010, Powder Magazine awarded her Best Female Performance for her role in Magic Moments*. She has been awarded Female Skier of the year by Powder Magazine, was the first female to be on the cover of Freeskier Magazine and has starred in too many ski films to mention, including projects from legendary filmmaker Warren Miller.

Lynsey has starred in or hosted television shows for NBC, ESPN, Bravo, The Ski Channel, Mountainfilm and Outside Television, has appeared on Good Morning America and even produced, directed and starred in her own film, the widely acclaimed Pretty Faces — an all female ski film featuring the best athletes from around the world that beautifully celebrates female empowerment and the transformative power of play. When she isn’t crushing powder, Lynsey can be found running her non-profit SheJumps.org, which encourages girls and women to participate in the outdoors through mentorship, and her movie production and apparel company Unicorn Picnic. 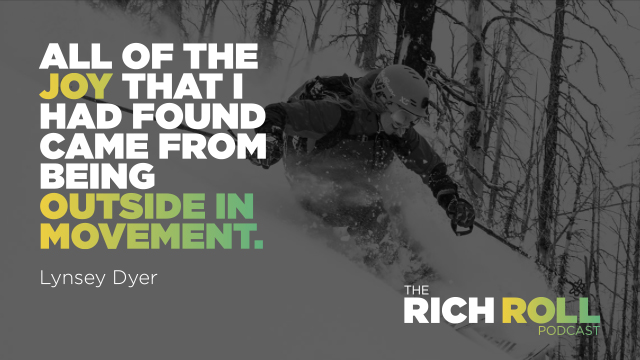 An unconventional badass, Lynsey is the personification of strength in femininity. A role model for young women across the world with an ethos I’d like my own daughters to emulate.

This is a conversation about Lynsey’s remarkable life. It’s about female impact on a male dominated subculture. It’s about courage in defying external expectations to follow your own unique path. It’s about the joy and freedom that come from blazing a life of adventure.

Simply put, it’s a conversation about what it means to pursue sport as art.

It was a pleasure connecting with Lynsey. I sincerely hope you enjoy the exchange.