“You are here now. Make the most of it and change what’s not working. It’s crucial.”

Why is great food important? How and why did restaurants become culturally significant? And what life lessons can be gleaned from the world’s greatest chef?

There is no more enthusiastic ringmaster for this exploration than the merry man of food himself, Jeff Gordinier.

A writer, journalist and author who sits at the converging junction of food and culture, Jeff is a frequent contributor to the New York Times and currently serves as the Food and Drinks editor at Esquire Magazine.

A graduate of Princeton University where he studied writing and poetry, Jeff is a former writer and editor for Entertainment Weekly, editor at large for Details magazine and over the years has written about music and culture for a multitude of national publications, including Travel + Leisure, GQ, Elle, Creative Nonfiction, Spin, Poetry Foundation, Fortune, and many others.

The occasion for today’s conversation is Jeff’s new book, Hungry: Eating, Road-Tripping, and Risking It All with the Greatest Chef in the World*. Equal parts mid-life crisis autobiography, adventure travelogue and biography, it chronicles the four years Jeff spent traveling with René Redzepi, the renowned chef of Copenhagen’s Noma — recently fêted as the #2 best restaurant in the world — in search of the most tantalizing flavors the world has to offer. And yet, the book really isn’t about food. A meditation on risk, re-invention, creative breakthroughs, and human connection, it sits atop my recommended summer reads. 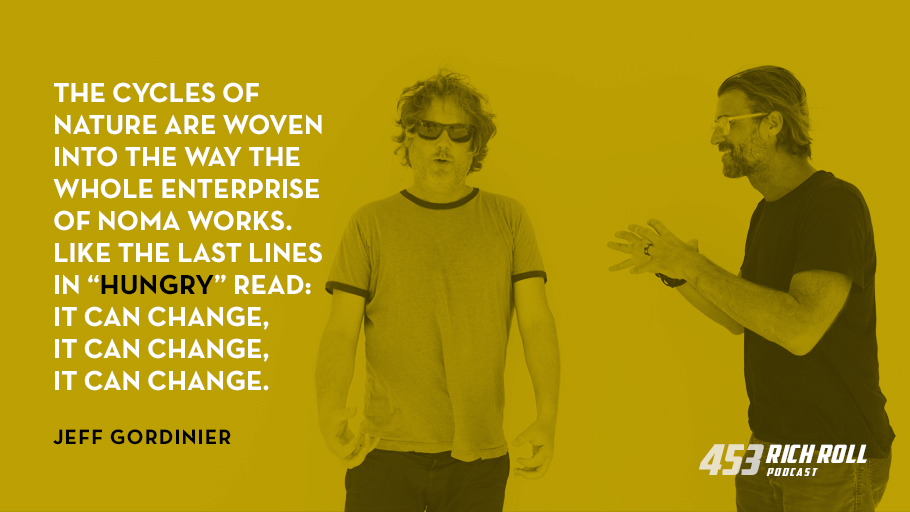 I first met Jeff in 2015 when he visited our home for a New York Times feature he was penning on the rise of veganism. Dubbed Vegans Go Glam, the piece caught fire, including a day spent as the #1 most e-mailed story on the entire New York Times website. Suffice it say, this was an insanely big moment for us, and the plant-based movement at large.

In the aftermath of that experience, Jeff and I struck up a friendship  He sent me an early copy of Hungry, which I devoured. It left me wanting to know more about Jeff. About food culture. About the mysterious René Redzepi. And what can be learned about life from this charismatic, cult-like genius redefining cutting-edge cuisine.

So here we are. This is a conversation about total commitment to mastery. It’s about creative expression. It’s about the cruciality of constant, fearless re-invention. It’s about investing in experience. And it’s about the importance of deep human connection — to others, oneself, and the environment we share.

As an anecdotal aside, it is this conversation that inspired my recent and uncharacteristically spontaneous decision to join Jeff and fellow food writer Adam Platt in Copenhagen a few weeks back. A once-in-a-lifetime, seat of our pants adventure I won’t soon forget, we toured the city with René and his head fermentation wizard David Zilber (a seriously fascinating dude in his own right). We experienced the Noma phenomenon behind the scenes. And we enjoyed the premier of the restaurant’s new forage-forward Plant Kingdom menu — a truly psychedelic experience incomparable to anything I have previously encountered. For more, view my Instagram Highlights and check out Dinner With the Disciples, Adam’s piece on the adventure in New York Magazine.

In the wake of my visit to Copenhagen, I now fully grok Jeff’s loyal discipleship of René and all things Noma. As counter-intuitive as it may sound, it’s actually not about snobby elitist cuisine. Noma is not just a restaurant. It’s a performance art installation. It’s a community. And it’s a movement — a philosophy of food and life that values connection, nature’s cycles and the unimagined extraordinary.

Jeff is a great dude. He’s lived a very interesting life. And he is an exceptional conversationalist.

The visually inclined can watch our entire conversation on YouTube here: bit.ly/jeffgordinier453 (please subscribe!) and the podcast is of course available on Apple Podcasts and Spotify.

This conversation — from R.E.M. to Redzepi and everything in between — is just pure, unadulterated joy.

I hope you enjoy it as much as I enjoyed having it.

Audible: With more than 180,000 audiobooks and spoken-word audio products, you’ll find what you’re looking for. Rich Roll listeners are entitled to a FREE audiobook and 30-day trial today by signing up at audible.com/richroll or text RICHROLL to 500-500 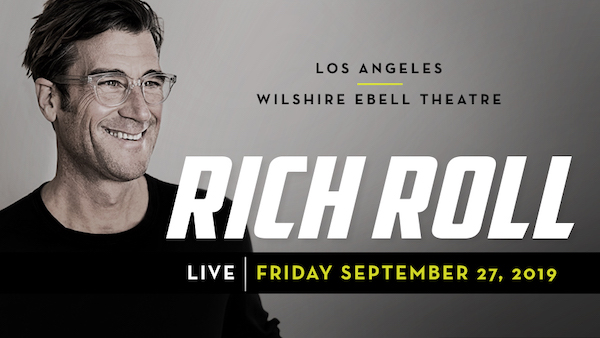