Scott Harrison On Why Clean Water Changes Everything

“I think there’s a real freedom that comes with service, but so many people are enslaved in the service of themselves.”

From the outside looking in, he was living the dream.

By 28, Scott Harrison had become the worst person he knew.

Utterly lost, mired in a crisis of conscience and desperate to rediscover his sense of purpose, Scott decided it was time for a drastic change. So he left NYC to spend a year volunteering as a photojournalist aboard a hospital ship off the coast of Liberia, West Africa.

During this time, Harrison witnessed and photographed levels of poverty and illness he never knew existed. As one year turned into two, he came to understand that many of the infections and diseases their group treated were waterborne, and could have been prevented if people had access to clean drinking water.

Scott couldn’t understand why nobody seemed to be focusing on solving this important problem at scale. So he decided to tackle it himself.

Upon returning to NYC in 2006, Scott turned his full attention to the global water crisis and the (then) 1.1 billion people living without access to clean water. The manifestation of that commitment is charity:water — a revolutionary for-purpose endeavor that to date has raised over $210 million to fund an astounding 20,000+ water projects that deliver clean water to more than 6.3 million people all across the world. 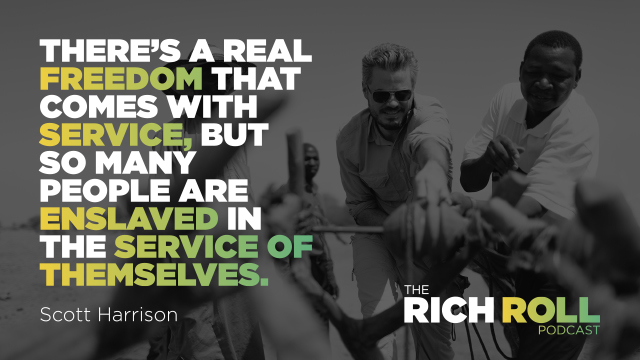 Equally impressive is the extent to which Scott has quite literally reinvented and re-energized how we give and how we think about giving. He did it by creating an aspirational brand. He did it by restoring public trust in charity. And he did it by leveraging technology to deeply connect each and every giver with the gift’s specific result and impact.

Simply put, Scott Harrison is one of the most impressive people I have ever met. His inspiring story from lost to found is legend.

My hope is that this conversation inspires action. Because each and every one of us holds the power to positively impact the life of another. And because life is more fulfilling, meaningful and rewarding when we are persistently engaged in the pursuit of service and giving.

My call to action? The Spring — charity: water’s monthly subscription service. I signed up. And you should too. 100% of all Spring donations go directly to the field to bring clean water to those in need, and Spring members will get updates of the impact their donations have.

Let’s all pitch in together. As a community. Because even a simple $30 gift can provide one person with clean water. And because it’s just cool and awesome to do generously for others.

For more information and to sign up, visit our special url cwtr.org/richrollspring or click the banner ad below.

This is a special one for me. I hope it is for you too.

Health IQ: reward your healthy lifestyle with life insurance that makes sense & never overpay again! To learn more and get a free quote, go to HealthIQ.com/ROLL

Donate to “The Spring” – Invest in a world where everyone has clean water. 100% of all donations brings clean water to those in need.