For reasons both obvious and perhaps less so, this week’s episode holds a very special place in my heart.

There is something unique about sitting before a microphone that permits a species of conversation difficult to otherwise have. Done right, the inherent formality of putting it all on the record can countenance an experience of rare intimacy that scarcely transpires in the course of conventional human interaction.

From the very beginning of this podcast journey, I’ve longed to host my father on the show. To provide a ceremonial opportunity to probe his life, uninterrupted. To learn things about him I’ve always wanted to know — but for whatever reason just never found the right occasion to ask.

For years, I harbored the fear that if I didn’t make such an experience a priority, it might never happen. And that would be something I would deeply regret for the rest of my days.

My drive was never to share such an experience with an audience. I wasn’t convinced the conversation I yearned for would be appropriate for public consumption. It’s always been about creating a moment just for us. A document I could privately keep for posterity. And for my children.

However, a compelling reason recently arose to transform this rumination into reality.

A gentleman and a scholar, Dave Roll has spent the better part of his life studying history. The apex of this passion is an incredible new book entitled, George Marshall: Defender of the Republic*. An enthralling and deeply thoughtful chronicle of America’s most distinguished soldier since George Washington, it’s also a deeply prescient and timely meditation on selflessness, leadership, and the momentous importance of moral character in political and social structures. The embodiment of these ideals, Marshall influenced the course of two world wars, and helped define the American century.

By way of background, my dad has enjoyed a very successful 35 year career as an accomplished attorney in the field of antitrust. Over the years, he successfully defended clients in investigations and enforcement actions brought by the Antitrust Division of the Department of Justice and the Federal Trade Commission. After government service at the FTC he matriculated to partner and ultimately managing partner of the prestigious Washington, D.C.- based international law firm Steptoe & Johnson. Later in his career, he founded the Lex Mundi Pro Bono Foundation, a non-profit, public interest organization that provides pro bono legal services to social entrepreneurs around the world.

Now in his third act, Dave is enjoying a successful career as an author. Also historical biographies, his previous titles include The Hopkins Touch: Harry Hopkins and the Forging of the Alliance to Defeat Hitler* and Louis Johnson and the Arming of America*, a biography of Harry Truman’s defense secretary.

Hitting bookstores July 9 (and available for pre-order now), the Marshall book presents an opportunity for my dad to join the ranks of the great historical biographers of our age. Enjoying unbelievable early praise, its received glowing blurbs from notable figures like General Stanley McCrystal, General David Petraeus, William Hitchcock and Walter Isaacson. 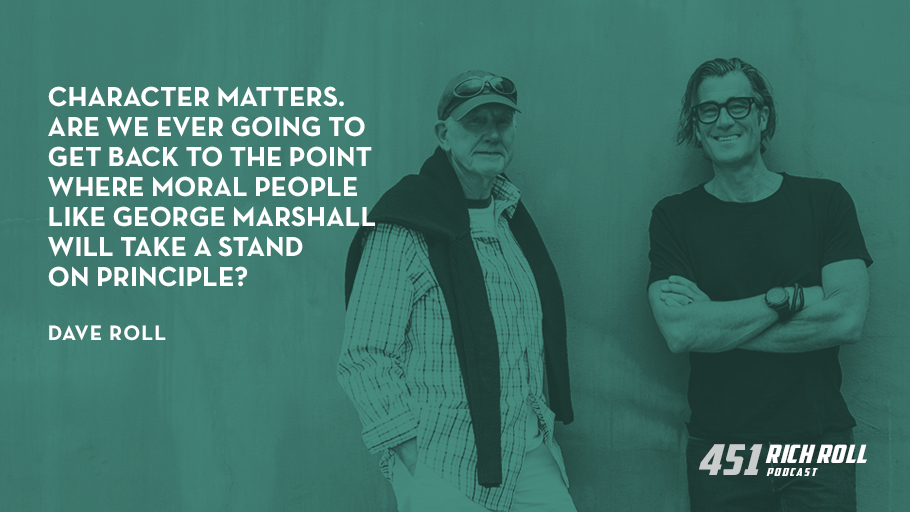 Fathers and sons. We’ve gone through it over the years. I’ve put him through more than I care to recall. And he didn’t always make it easy for me. But after weathering extended periods of, let’s just call it strain, we’ve arrived at a very good place. Perspective and age have brought us close. And thus the timing for this conversation could not be more perfect.

Equal parts personal and instructive, this conversation traverses Dave’s experience growing up as a Baby Boomer in the post WWII era. It tracks the emotional history of our relationship. And it then pivots to what can be gleaned from the life of George Marshall. How the example set by America’s greatest statesman informs how we think about current politics. The importance of moral leadership as we march towards another election cycle. And ultimately, why character matters.

The visually inclined can watch our entire conversation on YouTube here: bit.ly/daveroll451 (please subscribe!) and the podcast is of course available on Apple Podcasts and Spotify.

Dad, you truly are a gentleman and a scholar.

I am so incredibly proud of you.

And I love you more than you know.