One of my favorite people, Pete Holmes needs no introduction. But I’m going to give it to you anyway.

A stand up veteran with a cornucopia of comedy specials, television shows and late night appearances to his name, Pete is best known as the creator and star of the semi-autobiographical HBO show Crashing, a riotous and touching series he executive produced alongside Judd Apatow loosely based on Pete’s life in the early days of his comedy career.

In addition, Pete hosts You Made It Weird — hands down one of my absolute favorite podcasts (I was honored to be a guest) — and is the author of the brilliant and just released Comedy Sex God*. Part autobiography, part philosophical inquiry, part sacred quest, I can’t recommend this book more highly. Equally hilarious and profound, it hits bookstores everywhere this week. Pick it up immediately*. Read. Ponder. Thank me later. 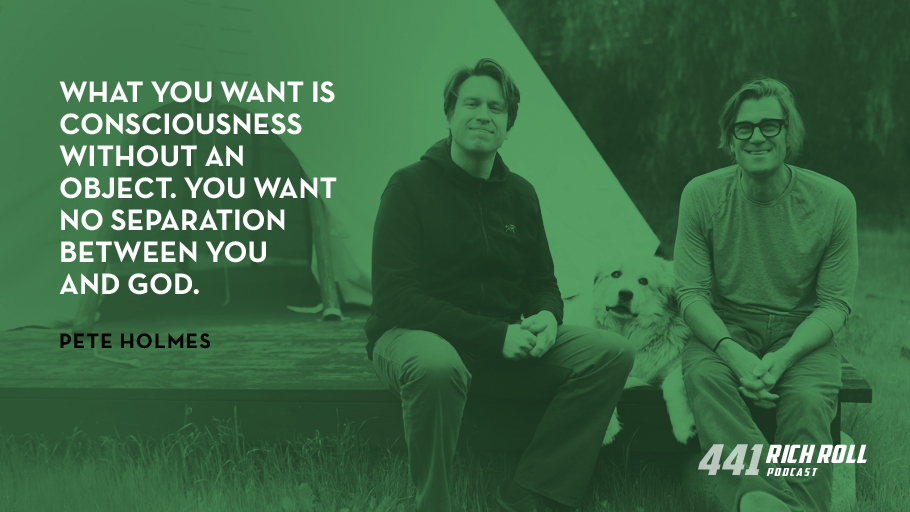 A long-time fan of Pete’s, we were first introduced by our mutual friend (and former podcast guest) Rob Bell. From that moment forward I have yearned to get this fellow traveler on the show. It finally happened. And the experience is everything I hoped it would be.

Comedy. Sex. God. And everything in between. We cover it all.

We discuss his evangelical upbringing and how his failed attempt to live up to picture perfect standards forced him to question his faith and re-examine long-held beliefs, catalyzing the soul-seeking journey he has pursued ever since.

We talk comedy and creativity. How he squares Christianity with alternative faith modalities. And what he has learned spending time with spiritual savants like Ram Dass and experimenting with psychedelics.

We explore how fatherhood has impacted his spiritual and professional perspective. What it’s like working with Judd Apatow. The experience of being a celebrity with a big show on HBO. And, more importantly, what happens when that show suddenly goes away.

But mostly, this is a beautiful exploration of the messy, confusing, wonderful, mysterious, disorienting thing we call life.

You can watch the entire conversation on YouTube at bit.ly/peteholmes441 (please subscribe!) and the podcast is of course available on Apple Podcasts and Spotify.

As Pete would say, GET INTO IT!

Audible: With more than 180,000 audiobooks and spoken-word audio products, you’ll find what you’re looking for. Rich Roll listeners are entitled to a FREE audiobook and 30-day trial today by signing up at audible.com/richroll or text RICHROLL to 500-500

Thanks to Jason Camiolo for production, audio engineering and show notes. Video, editing and graphics by Blake Curtis and Margo Lubin. Theme and interstitial “Be Still” music by Ana Leimma.