Knox Robinson On Why Running Is An Act of Rebellion

“Running is an act of rebellion.”

What is running culture?

I suppose the answer depends upon whom you ask. For example, Sanjay Rawal’s perspective will likely vary from that of Shalane Flanagan.

If you ask Knox Robinson, his definition will have little to do with splits and podiums — and everything to do with movement as an art form. Running as a means of personal and philosophical expression. The physical voice of literature. Poetry. Music. And Politics.

For Knox, running as an act of rebellion — a means to unshackle oneself from pressures and expectations both external and internal. Freedom from the lies others tell us. And liberty from the lies we tell ourselves.

This week he explains. You’re not going to want to miss it. 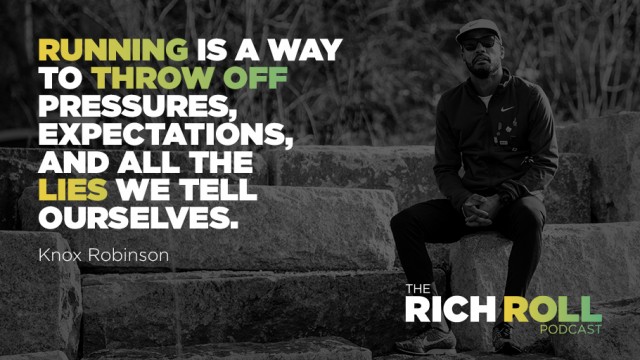 Inhabiting a space in defiance of labels, Knox is the kind of human who, when asked to describe himself, effortlessly pulls the perfect quote from the poetry of Amir Baraka: “[I am] a long-breath singer, would-be dancer, strong from years of fantasy and struggle.”

It follows that Knox’s relationship with running also fails easy definition. Despite his father’s passion for local 10K’s, Knox showed little to no athletic promise as a youth. Nonetheless he notched his way up to national caliber at Wake Forest University. Then he walked away from the sport altogether for the better part of a decade. He studied black history, art, literature and poetry. He pursued a career as a spoken word artist. He worked in the music industry managing artists. And he served as editor-in-chief of Fader – the ultimate print destination for all things hip hop, indie music, urban style and culture — jet setting to Fashion Week parties in Paris and penning thoughtful cover pieces on everyone from Kanye to The White Stripes.

It was his son’s birth that compelled Knox to dust off his trainers and revisit his connection with athleticism. Expanding his relationship beyond the scope of performance, he began to imagine new horizons for his role in sport. With this epiphany came a new life. And a mission: to leverage movement as an art form — running as physical manifestation of both individual expression and communal cultural identity.

This is his story.

One of the more intimate, earnest and layered conversations I’ve had in recent memory, I left this exchange better for having had it, thinking more deeply about my own relationship with running, and how I can better impact others. My hope is that it does the same for you.

Photos of Knox: 1) in white sunglasses courtesy of Chadwick Tyler; 2) sitting and running along the Hudson River courtesy of Zach Hetrick; and 3) in green singlet courtesy of Jason Suarez.

22 Days Nutrition: the 100% plant-based, 100% USDA certified organic nutrition products and platform designed to meet the needs of your healthy, active life. For 10% off all products and free shipping, visit 22daysnutrition.com/richroll and use promo code RICHROLL at checkout.