Travis Barker On Premonition, Intuition & The Importance Of Following Your Heart

“Dreams don’t work unless you do.”

Dubbed one of the “100 Greatest Drummers of All Time” by Rolling Stone, Travis Barker rose from blue collar roots to become one of the world’s most talented, prolific and hard working rock stars — a multi-hyphenate musician-producer-entrepreneur who initially made his mark as the drummer for Blink-182, the influential, multi-platinum punk-rock band that earned it’s very first Grammy nomination this week for it’s latest release, California.

Today, Travis is celebrated for his unique percussive acumen; a rare ability to collaborate with a diversity of musical giants — people like Eminem, Lil Wayne, Slash, Mary J. Blige, RZA, Tom Morello and Steve Aoki — across a swath of genres that reach past rock to country, jazz, hip hop and everything in between.

Extending his entrepreneurial flair beyond music, Travis is also the founder of accessory/apparel company Famous Stars and Straps as well as LaSalle Records and is an investor in a variety of ventures including Crossroads Kitchen – one of Los Angeles’ best restaurants and perhaps the most acclaimed vegan restaurant in the world.

Travis bares his soul in Can I Say: Living Large, Cheating Death, and Drums, Drums, Drums* — a deeply personal and brutally honest memoir chronicling the highlights and lowlights of the renowned drummer’s art and life, including the harrowing plane crash that nearly killed him and his traumatic road to recovery. Ultimately, it’s a book about personal survival. Constant reinvention. Musical salvation. And fatherhood. 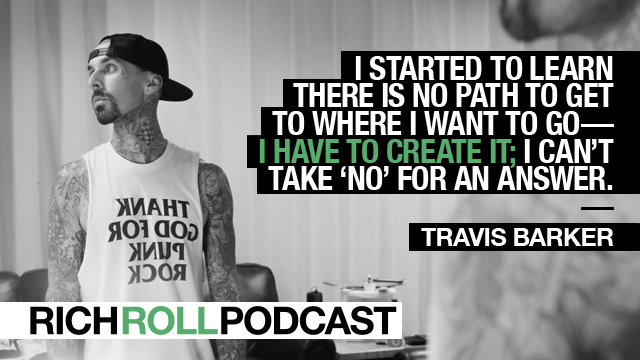 Travis Barker is a great rock star. But behind the tattoos, sold out arenas and dope rides lives a quiet, soulful artist with a prodigious work ethic. A sober consciousness birthed from pain. Etched from hardship, Travis Barker has survived some serious shit. But it’s our wounds that make us human. And it’s that humanity that interests me the most.

This is a conversation about a remarkable life. The pivotal moments that forged it. The premonitions that foretold it. The intuitions that directed it. The humanity behind it. And the heart that animates it.

Open, humble and present, I absolutely loved spending time with Travis. I sincerely hope you enjoy the first of what I hope will be many future exchanges.

StrideHealth: The first health insurance recommendation engine tuned & tailored to the life of the individual. Find the perfect health plan for you—go to stridehealth.com/roll and save over $400 for the year. It’s easy coverage in 10 minutes or less, built just for people like us.

Past Episodes Relevant to Today’s Conversation