Paul de Gelder On The Shark Attack That Saved His Life

Imagine being attacked by a 9-foot bull shark.

One moment you’re swimming peacefully in Sydney Harbor. The next minute you’re being rammed and pulled underwater, your leg and arm hopelessly trapped in the shark’s jaw.

The pain is unimaginable.

But somehow, against all odds, you wriggle free.

Ultimately you lose that arm and that leg. But that shark? It doesn’t claim your life.

Instead, it gives you an entirely new one.

This is the extraordinary and inspiring ‘never say die’ story of Paul de Gelder. 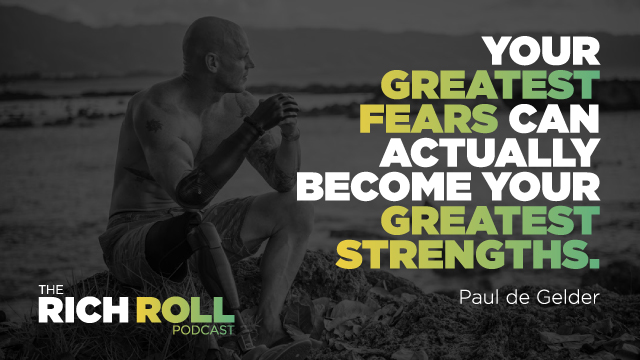 Truant and wayward throughout his teens, Paul left his Australian home town at an early age to start a new life. Despite some early success in the Australian music scene (he once opened for Snopp Dogg), he failed to find the purpose he so desperately sought. So he joined the Royal Australian Army as a paratrooper in November 2000 at the age of 23 — a defining moment that brought his life structure, discipline and ultimately more meaning than he could have ever imagined.

Over the next several years, Paul was deployed as a United Nations peacekeeper, honing the art of jungle and urban warfare, unarmed combat, specialist communications, combat first aid, parachuting, and snipping. Rising through the ranks, Paul ultimately achieved his dream of becoming Royal Australian Navy Clearance Diver — Oz’s version of a Navy SEAL. But trouble hunted him down in the form of a brutal shark in February 2009. Paul lost two limbs, and his career as a daredevil Navy Bomb Clearance Diver was flung into jeopardy.

Determined to transform the horrific experience into a net positive, he fought through excruciating pain — smashing challenge after challenge — amazing the medical staff with his unparalleled will to succeed. In the 7 years since the shark attack, Paul’s life has changed in every aspect. Today he travels the world as a top motivational speaker, passionate environmentalist, adventurer and mentor to school kids. He has spoken at venues all around the world, including the United Nations, promoting ecological conservation and (quite ironically and heroically) shark conservation. Along the way, he continues to dive with sharks all over the world — including Great Whites without a cage.

One of Australia’s most in demand speakers, Paul has been featured on every major U.S. and Australian media outlet. Since 2014, he has served up co-hosting duties on Discovery Channel’s Shark Week, hosts the Nat Geo special Fearless (in which he embedded with an anti-poaching team in Zimbabwe), and worked on behind the scenes footage for the 2016 Hollywood blockbuster The Shallows with Blake Lively.

Today I am proud to share Paul’s story — a death-defying tale of survival, perseverance, positivity, grit, hope, rebirth and the extraordinary breadth of human possibility.

One of the most inspirational people I have ever met, this is a conversation that will leave you breathless — and inspired beyond measure.

For the visually inclined, you can watch the podcast on YouTube here.

Four Sigmatic: A superfood company founded by a group of Finnish friends. They aim to popularize medicinal mushrooms by incorporating them in more mainstream products like coffee and hot cocoa. Visit www.foursigmatic.com/roll and enter the promo code ROLL at the checkout and save 15% on your order!

Legal Zoom: Legal built for you No complicated forms. No robots. Just answer some questions and we’ll take care of the paperwork for you. Get started today at: legalzoom.com and enter the promo code ROLL at checkout for special savings.

Thanks to Jason Camiolo for production, audio engineering and show notes; Shawn Patterson for graphics; and Michael Gibson for videography. Theme music by Ana Leimma.