Navy SEAL David Goggins Is The Toughest Athlete On Earth — Thoughts On Mindset, The 40% Rule & Why Purpose Always Trumps Motivation

“When you think you’re done, you’re only at 40% of your total potential.”

This week’s guest is incontrovertibly the most inspirational person I have ever met — a man that will catapult you into 2017 with the inspiration and tools to chase huge dreams, shatter limits, and actualize your best, most authentic self.

Often referred to as the toughest athlete on the planet, David Goggins (@davidgoggins) is the only member of the US Armed Forces to complete SEAL training (including THREE Hell Weeks), the U.S. Army Ranger School (where he graduated as Enlisted Honor Man) and Air Force tactical air controller training.

But David is perhaps best known for his superhuman feats of strength and ultra-endurance.

After several of his friends died in a 2005 helicopter crash while deployed in Afghanistan, David honored their memory by tackling the 10 most difficult endurance challenges on Earth to raise funds and awareness for the Special Operations Warrior Foundation, which provides college scholarships and grants to the children of fallen special ops soldiers.

Hence began a most unexpected yet remarkably storied athletic career as one of the world’s most accomplished endurance athletes. Highlights include: 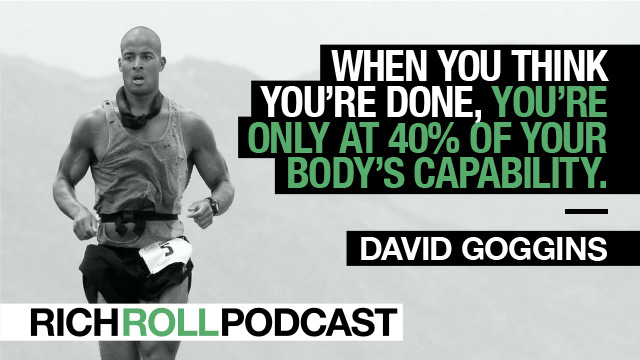 But perhaps David’s greatest accomplishment is that throughout his life, he has faced and overcome a concatenation of seemingly insurmountable obstacles to become the man he is today – obstacles like asthma, sickle cell anemia, psychological and physical abuse, obesity, academic struggles, and even a congenital heart defect that often left him competing — and winning — on a mere fraction of his actual physical capabilities.

In addition to being one of the most remarkable people I have ever met, David has had a profound impact on me personally. It was his singular example that ignited my passion for ultra-endurance and fueled the self-belief required to pursue a new life. In truth, I’m not sure I would have achieved my athletic and life goals had he not blazed the path before me. I simply cannot ever repay the debt of gratitude I have for this man.

One of the most powerful podcasts I have ever produced, this a conversation about the primacy of purpose to cultivate your inner voice. It’s about passion and self-accountability. It’s about the limiting beliefs that hold us back and the importance of mindset to overcome them. And it’s about the embrace of suffering as a crucible for growth and self-knowledge.

But ultimately, this is a conversation about what it means to be truly alive.

P.S. – If you enjoy this podcast and can’t get enough of Goggins, you’ll dig my podcast with Jesse Itzler, author of Living With A SEAL. I’ll give you one guess who that SEAL is.

Guru Singh: A Master Spiritual Teacher on The Power of Cultivating Awareness To Awaken Your Highest Self