“Staying consistent over a long period of time is ultimately the greatest way to prove success.”

A force in business, civic affairs, politics, and philanthropy in Los Angeles and beyond, Casey Wasserman is perhaps best known as the chairman and CEO of Wasserman — one of the world’s largest, most powerful, and most successful sports, entertainment and lifestyle marketing and management agencies, representing brands, properties and talent on a global basis.

When he’s not negotiating on behalf of Nike, ESPN, Andrew Luck or Russell Westbrook, he’s either leading the charge to bring the 2024 Summer Olympic Games to Los Angeles as Chairman of LA 2024, or funding education, health, arts & human rights initiatives via his  Wasserman Foundation philanthropic arm.

Lovingly and painstakingly mentored throughout his childhood by his late grandfather Lew Wasserman — one of the most legendary Hollywood talent agents and studio executives of all time — Casey’s love of business, sports and entrepreneurship was born early. By ten, he was a torch bearer during the 1984 Summer Olympic Games in Los Angeles. By twelve, he was officially employed in professional sports as a ballboy for the Cleveland Browns. And by 24 he would not only own his first professional sports organization — the Los Angeles Avengers Arena League football team — he was named Chairman of the entire league. 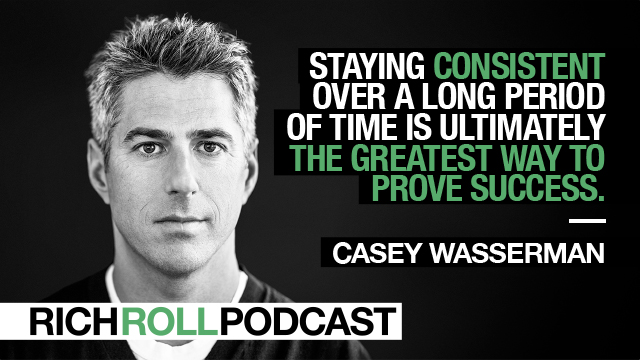 I’ve known Casey very casually for a couple years. What impresses me most isn’t the success and accolades. Instead, it’s how he consistently comports himself — with grounded self-awareness, honest humility, and a very present sense of what is most important in life.

I have tremendous respect for this amazing man. I sincerely hope you enjoy the exchange.