By adminSeptember 8, 2008No Comments 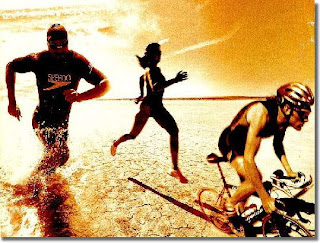 Back to back 23/24 hour training weeks, including an Ultraman “race simulation”.  Tons of climbing, long runs and very high heat.  Today is my first (and much needed) rest day in 2 weeks.
Here is what I’ve been up to the last 7 days:
Monday: Mt. Baldy climbing ride with Kona qualifier Dave Meyer.  Per my previous post, this was a 28 mile climb to 6350 feet — 3 hours up, 1 hour down.  As for Meyer, he just won his 45-49 age group in this past weekend’s LA Triathlon, clocking the fastest bike & run splits in his division, 66th overall with a time of 2:15 — including a 41:01 10K run split — that is 6:36 pace.  And I know he was not rested for this one — putting in heavy hours getting ready for Kona.  Long way of saying I’m in good company training with this guy.  He is fast.
Tuesday: My “rest day” — a 3500 swim workout.
Wednesday: 3 hour climbing ride, including hill repeats – 3x Stunt Road, a rather steep unrelenting 4 mile climb right in my backyard.  One (of many) great things about this climb is that there is a water fountain about 1/2 mile from the peak that a friendly resident installed in his driveway.  So I could make quick stops on each descent and take in some water, which was great.  Legs were surprisingly fresh given that I just completed my Ultraman race simulation a couple days prior and clocked relatively even times on each of the 3 repeats.  Felt really good that my legs seem to be recovering quickly not only between workouts but between repeats as well.
Thursday: 90 minute morning pavement run.  Felt pretty darn good considering the cycling miles under my belt over the last week.  Negative split my loop at 8:00 pace overall.  Not bad.  Added a 90 minute afternoon pavement run in the super high heat (100+).  Generally double run days are the toughest for me, but this one felt pretty good and they are getting easier.  I try to do my afternoon runs at the hottest part of the day (around 3pm) on sunny blazing hot pavement as deep in the Valley as possible — trying to do everything to acclimate myself to high heat in preparation for Hawaii; in this case, I handled the heat well and finished strong.
Friday: Double swim day — 5000 yard interval workout in the am (some pace 1000’s and sets of 100’s on 1:20); 4000 in the afternoon (some pace 800’s and again sets of 100’s on 1:20).  I haven’t put in 9000 yards of swimming in one day in twenty years.  Felt good to get this done and my per 100 pace is slowly getting better.  Starting to be able to conceptualize a 10K swim.
Saturday: 6 hour ride with my buddy Vinnie Tortorich, ultracyclist supreme, fitness trainer and cancer survivor.  Vinnie is currently training for the Furnance Creek 508 — the world’s premiere ultramarathon bicycle race covering 508 miles (nonstop!) with a total elevation gain of over 35,000 feet crossing ten mountain passes, and stretches from Santa Clarita across the Mojave Desert, through Death Valley, to Twenty Nine Palms.  Vinnie has done this badass race (and many other ultracycling races) many times, and trains like an animal — generally putting in 12 hour climbing rides most Saturdays.  Anyway, I am proud to report that I hung pretty well with him.  Several hill repeats and some long hard flats.  Given that Vinnie has been doing this for decades and averages about 210 watts on his 12 hour rides, I feel pretty good about being able to stay with him  or at least in his general vicinity.  He would generally pull ahead near the climbing peaks and after a spell on long flats he would drop me, but I stuck it as best I could without exceeding my Zone 2 HR of 130.  And he was a wealth of information and knowledge on training and nutrition.  I learned more from Vinnie in this 6 hours than I could reading 10 books.  Really hot day but improving on my nutrition and finished last hour quite strong.
Sunday: Woke up with super fatigued legs and pounded out a 2 hour trail run up the dirt section of Mulholland Drive from where it dumps out onto Topanga in the Valley all the way to the Nike Missile Lookout above Mandeville Canyon and back.  Lots of long ascents and rollers.  Unfortunately I forgot my fuel belt, so did the whole thing without any water, Cytomax or electrolytes / gels.  This was a very bad idea.  I did take in a bit of water at the Lookout water fountain at the halfway point, but that was it — and I paid for it.  I was dead in the afternoon after spending a couple hours playing with the kids at the beach on a scorching day, dreading my one hour evening pavement run.  Figured I would survive it and focus on form, but once I got going, felt surprisingly good and built the run to a swift (for me) sub-8 pace for the second half.  An hour after my evening run however, I was as tired as I have been since I started training.  So tired in fact, I had very little appetite and could barely move.  Note to self — do not forget your fuel belt on long runs.
Monday: Rest day.  Finally.