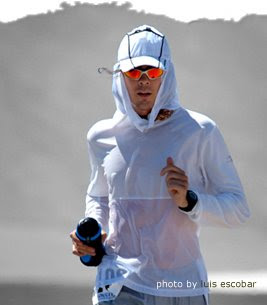 In the world of endurance running, people may know the name  Dean Karnazes, as he has been wildly instrumental in popularizing ultramarathon running and elevating consciousness of the sport into the mainstream.

But in truth, the undisputed king of ultrarunning is Scott Jurek.  Yeah, you’ve probably never heard of him, but let me assure you, he is a true badass.  Jurek has won the prestigious  Western States 100 mile race something like 7 times — a distinction elevated by the fact that he is the youngest winner (1999) and also set the course record in 2004.  In addition, and among countless other ultramarathon victories, Jurek has won the famed Badwater twice — a blistering and surrealistic 135 mile run across the Mojave Desert in 120 degree heat ending on Mt Whitney at 8350 feet in elevation.
And if you have heard of Jurek, you might not know one very important thing about him — Jurek fuels his body on a COMPLETELY VEGAN DIET!
In addition to his rigorous training schedule and competing in 10-12 ultramarathons per year, all seven of his consecutive wins at the Western States 100 Mile Endurance Run were performed on VEGAN FUEL.
Actions speak louder than words people. Again, I’m not advocating a vegan diet for everyone. But even contrarian minds would have to agree that this is is pretty extraordinary evidence that one can excel athletically on a world class level on a vegan diet.
Check out Scott Jurek’s website here.
Check out this GREAT interview with Jurek at EliteRunner.com here.
Check out this interview with Jurek in JAI! Magazine (ironically unrelated) here.