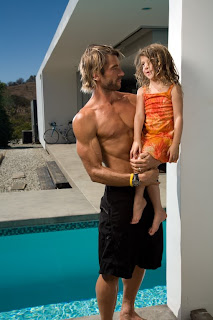 This almost daily response I get when telling people about my endurance endeavors is amplified exponentially when I tell them that not only am I doing it, I’m doing it VEGAN.

I get it every time.  But the truth is, I’ve never felt better or stronger, and my aerobic capacity and endurance is absolutely through the roof.

A former mega carnivore, I was pushing a sedentary 198 lbs when I turned 40 about a year and a half ago.  I was sick and tired of being out of shape, especially given that I am a former world ranked competitive swimmer.  By looking at me then, you would never have guessed.

So I decided to make a change.  In January 2007, I did a 5 day cleanse, using Dr. Shulze’s Superfood and herbal products.  I bought a juicer and basically fed on organic fruit and vegetable juices and herbal broths using the Shulze products.  I kicked caffeine and finished the cleanse feeling amazing and ready for a new start.  This is when I embarked on a vegetarian diet and began a long slow process of getting fit once again.

But honestly, after 6 months on a vegetarian diet, I was not dropping any weight and didn’t feel that much different than I did as a meat eater.  Probably because I was eating large volumes of cheese, but alas….Frustrated, I was about to abandon the plan altogether, but decided in June 2007 to experiment with going vegan.  Almost immediately, I felt a HUGE energy shift.  I felt lighter and my energy levels escalated and remained high throughout the day.  Absent were those energy lulls I felt after meals, something I thought I just had to live with.  In short, I felt amazing.  My strength and endurance levels increased quickly and my cravings for dairy slowly dissipated.  I began working out more, the weight came off and I just started feeling better and better.  I did a few traithlon races, and after only a small amount of training, I did well.  Six months into the vegan diet, I was down to a lean and mean 165 lbs (30 lb+ drop), ripped and hooked.

A year later, I am working with a coach, am training 26 hours a week and am as fit as I have been since I was 20 years old.  I’m not as fast as I was in the pool in those days, but I am handling similiar pool yardage and I have to say that my running and cycling are far better than they have ever been, despite being competitive in the sport in my 20’s.  And my endurance is far beyond what I could do at that age.

I’m not saying that being vegan is for everyone.  But I am saying that it has more than agreed with me.

Without going into a discourse on the misconceptions about the body’s protein requirements and the ills of conventional wisdom on this subject, suffice it to say that I get more than enough protein through a diet of vegetables, fruit and various grains.  I do supplement during heavy training weeks with some soy, hemp and rice proteins, as well as amino acid supplements and Bragg’s Amino’s.  And this seems to work out just fine.  Like I said, I’m ripped.  And I don’t lift weights.

“What do you eat in a typical day?”

I get this question all the time.  So here is an example of some of the foods I typically eat.  Made all the easier by virtue of my wife’s excellent cooking:)

I drink a concoction of organic fermented enzymes and various green superfoods and antioxidants that is created by my quasi-nutirtionist Compton Rom of Ascended Health.  Mixed in with this is a powder comprised of macca and a variety of other anti-oxidant, endurance enhancing ingrediants — I will get you the full list of ingredients on both of these potions.

If the workout (whether swimming, cycling or running) is 3 hours or under, I generally only take in water and an electrolyte drink (without any whey protein) such as Cytomax, sipping in 20 minute intervals to take in roughly 300 calories / hour.  I really don’t need anything more.  For longer workouts in the 4-7 hour range, I still remain on a liquid based diet of water, Cytomax and Hammer Nutrition’s Sustained Energy or Perpetum, high carbohydrate drinks with a modicum of soy protein — again at 300 calories / hour.  I try to avoid eating any solid food, but if I need it, a Cliff Bar generally suffices.

I usually juice.  Organic beets, carrots, kale, spinach, blueberries with some flax seed oil, almond milk, and VEGA.  I try to have one of these drinks every day within an hour of my workout to replenish glycogen levels– this is the key daily thing for me for overall wellness, health and post-workout recovery.  I also like FRS, a fatigue-fighting recovery drink that contains Quercetin, a powerful natural anti-oxidant.

I try to eat relatively light.  Brown rice, lentils, gluten free pasta, fruit/vegetables, black beans or a light salad with avacados and vinagrette generally does the trick.  Sometimes an eggplant salad or veggie sushi.  And always a Kombucha.  I love that stuff.

Much like lunch.  Rice, beans, salad, lentils, spinach, broccoli, asparagus, green beans and another organic fresh juice with VEGA.  Gluten free pasta, veggie burrito and veggie sushi on other days.  Potato salad made with Veganaise (this stuff is great) or baked potato with Veganaise.

With all the calories I burn, I do not subscribe to the “low carb” fad currently so popular.  And I’ve found that by keeping the body vegan and all my training, I really don’t worry about weight anymore.  In fact, my appetite has decreased and I now find that I generally don’t binge like I used to, eating really only what my body seems to require.

I can get into more specifics on particular foods later, but this is a good overview for now.