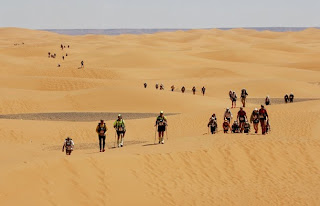 OK, this got my attention.

My new Ultraman buddy Josef Ajram from Spain is trying to convince me I should do Marathon des Sables — a ludicrous 6 day / 151 mile (243km) endurance race across the Sahara Desert in southern Morocco.  Many consider MdS to be the toughest foot race in the world, covering a distance equivalent to six marathons over six days.  On sand.
This is insane, incredible, compelling, exhilarating and absurd.  If you don’t believe me, click HERE to watch this beautiful short documentary by Canal + / Spanish television of Josef and his his friends making the attempt last year.  One of Josef’s teammates is former Spanish soccer star Luis Enrique.  It is beautifully shot, and although in Spanish, you will quickly get the idea.
Josef has done the race twice and is going back in April for a third attempt.  Despite his urgings, don’t think April is in the cards for me.  But I admit the wheels in my head are turning — maybe 2010?  It will be the 25th anniversary of the race.  Hard to think of anything more epic.
Click HERE for the Marathon des Sables website