I Love My Newtons 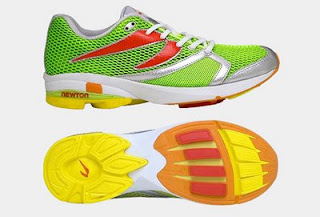 I love my Newton Running Shoes !
These shoes are the latest in running technology created by a small start up company in Boulder Colorado.  What is unique about them is that the padding is placed not on the heel but on the forefoot, to promote a toe strike stride rather than a heel strike, now understood to be counter to the body’s natural stride mode and a catalyst for injury over time.  In essence, when you run barefoot, you naturally land on your forefoot.  Newtons are developed to make your feet think they’re barefoot, thus increasing performance.
They definitely take time to adjust to and feel quite odd at first, but over time I have adopted a new way of running based on leaning forward and landing my foot more on the toes rather than the heel.  The result has been an injury free season (so far) as well as vast improvement in my running overall.  Can’t say enough about these shoes.
I have been speaking recently with the great Ian Adamson, 2006 Adventure Racing World Champion and Newton Running Affiliate about working with Newton as an ambassador for the brand.  I’m too green for them to officially sponsor me, but hoping to get some shoes and gear from them for Ultraman.  I’ll keep you posted.