I’m the first to admit that my initial reasons for adopting a plant-based lifestyle were selfish. I was overweight. I felt lousy. I looked lousy. I had a health scare. Basically, I just wanted to look and feel better. I wanted to enjoy my kids at their energy level. I wasn’t ready to succumb to middle age defeat.

So I took the leap. A leap without much expectation I might add.

Then the miracle. I dropped 50 pounds. My vitality returned. That long-gone youthful glow restored. I didn’t just get my life back, I got an entirely new one. Today I am living the life beyond my wildest dreams.

I could have never predicted the journey that would follow this simple decision. It has been long, at times hard, but ultimately extraordinary in every way imaginable. It’s not an understatement that everything in my life has changed for the better. And for that I am extremely grateful.

There is one thing I know with certainty. If you want a great life, give more than you receive. This is primary reason behind my decision to start this podcast — to share with you the people, information, tools and inspiration that have been so incredibly transformative in my life.

But let’s be honest. I didn’t get into this plant-based lifestyle because I wanted to save the animals. Frankly, my concern for the health of the planet could be characterized as passive lip service at best. I was the furthest thing from a food activist. And when it came to environmental, ethical and political issues like GMO’s, the deleterious effects of factory farming, slaughterhouse conditions, carbon emissions, the deforestation of the rainforests, species extinction, the mistreatment of circus animals, the pollution and overfishing of our oceans and the moral implications of harvesting animals for food, the truth is that I didn’t really give it much thought.

That was then. But this is now.

In the eight years since I began this journey, I have changed. I have grown. Ever so slowly, my eyes have started to open to a myriad of uncomfortable realities relating to how our world functions. Unpleasant and unnecessary realities that I can no longer in good conscience turn a blind eye to.

I’ve been blessed with a platform. My book and this podcast have given me an audience. With this comes a certain responsibility that I take seriously.

What is that responsibility? I can’t say that I’m entirely sure. However, I do know that it entails a commitment to the truth. A commitment to shed light on and help raise awareness around issues that affect not just me, but all of us. Things that are not right. Things that need to change.

The truth isn’t always comfortable. It’s generally not convenient. And often not popular because it challenges us to think differently and in many cases modify behaviors we might not want to modify.

To me, the truth also presents a growth opportunity. An opportunity to be bold. To do and be better. I know can do better. And if this podcast isn’t about that, then it’s just wasted air.

Our fast-paced, hyper-industrialized world lives in a comfortable haze of convenience priority. We go about our day happily and for the most part unconsciously disconnected from the process undertaken to bring consumer products into our homes. This includes the clothes we wear, the devices we use and of course the foods we enjoy.

This is process I really don’t want to look at. It’s uncomfortable because it forces me to transcend denial and truly consider what actually goes on behind the shroud of obfuscation erected by giant conglomerates, powerful lobbying efforts and governmental forces that have a strong vested interest in maintaining the disconnect that cloaks the public from certain unpalatable realities.

Dismantling the disconnect isn’t fun. Certainly not as fun as riding my bike. Given a choice, and in my earlier incarnation, I’d be the first to look the other way and go happily about my day, irked by anyone presumptive enough to challenge my chimera of comfortable ideals.

But I can’t live that way anymore. Because delusion, ignorance and consumer malaise have become more uncomfortable to me than the truth. In recovery, they say “the road gets narrower.” I didn’t used to know what that means.

Now I do. This is what this week’s show is all about.

A veteran of the animal rights movement, and this week’s guest, Lisa Lange is Executive Vice President of PETA (People for the Ethical Treatment of Animals). She has coordinated the production of some of PETA’s most popular and successful videos and PSAs and works closely with celebrity PETA supporters, including Alec Baldwin, Bill Maher, Charlize Theron, Eva Mendes, and Casey Affleck. She also networks with Hollywood directors, producers, and writers, convincing them to incorporate positive animal messages into TV programs and movies.

A gifted debater, Lisa is a regular guest on The O’Reilly Factor and has debated animal rights opponents on Today, CNBC, Nancy Grace, Larry King Live, Your World With Neil Cavuto, and countless other television and radio networks and programs. She has appeared many times on entertainment shows—such as Entertainment Tonight and CNN’s Showbiz Tonight—and on E! to discuss PETA’s work in Hollywood. Her efforts to save animals have made headlines in major publications throughout the country, including The Washington Post, The New York Times, The Chicago Tribune, and USA Today.

Again, I have never been a vocal animal rights activist. And I wasn’t sure I was all that comfortable with some of the tactics undertaken by PETA to raise awareness. Why? Because they challenged me to think about issues I didn’t really want to think about. But Lisa – a friend as well as an avid and accomplished triathlete in her own right — has been instrumental in my own personal evolution, helping me grapple with, better understand and ultimately embrace the bigger issues at play.

So today I’m owning it. Shining a light on uncomfortable, inconvenient realities I feel I cannot ignore — the terrible and inexcusable plight suffered by the billions of helpless animals that are abused, tortured and mistreated as cogs in the massive wheel that is our industrialized food system. A system that is beyond untenable, utterly unsustainable, unequivocally unethical and unfathomably destructive to our environment (I know — that’s a lot of “u-words”).

Intended to challenge your comfort zone, this conversation is about what we vote for when we go to the circus, buy clothes and purchase food. It’s a discussion about values. Simply put, ignorance isn’t cool. And how we spend our hard earned dollars is important. Because each dollar spent is a reflection of our values. It represents a vote for who we are and what we stand for. And that vote – as small and as insignificant and disenfranchised as you might feel it to be – actually is important. A vote we can collectively leverage to forge a better world for ourselves, our children and future generations.

Even if you are someone with a negative preconception of the animal rights movement, I implore you to set aside those notions and enter into this conversation with an open mind.

Because contempt prior to investigation is tantamount to willful ignorance.

At our core, I truly believe we are all compassionate beings. True strength means embracing that core value. And there is something about that that is just downright cool.

So let’s do something different. Let’s own it.

I sincerely hope you enjoy the conversation. Let me know what you think in the comments below.

PS – Here’s the interview I did with Lisa back in 2009. Video by PETA with training footage directed by Stacie Isabella Turk / Ribbonhead 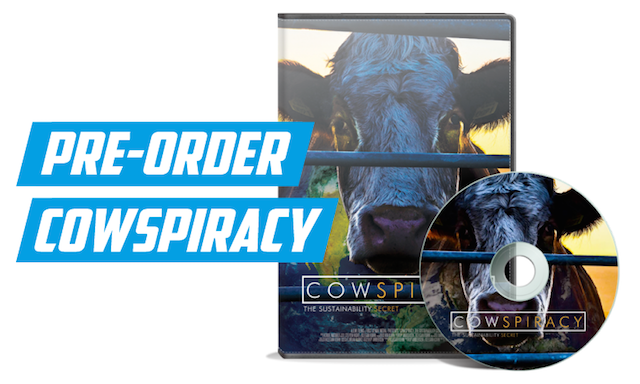